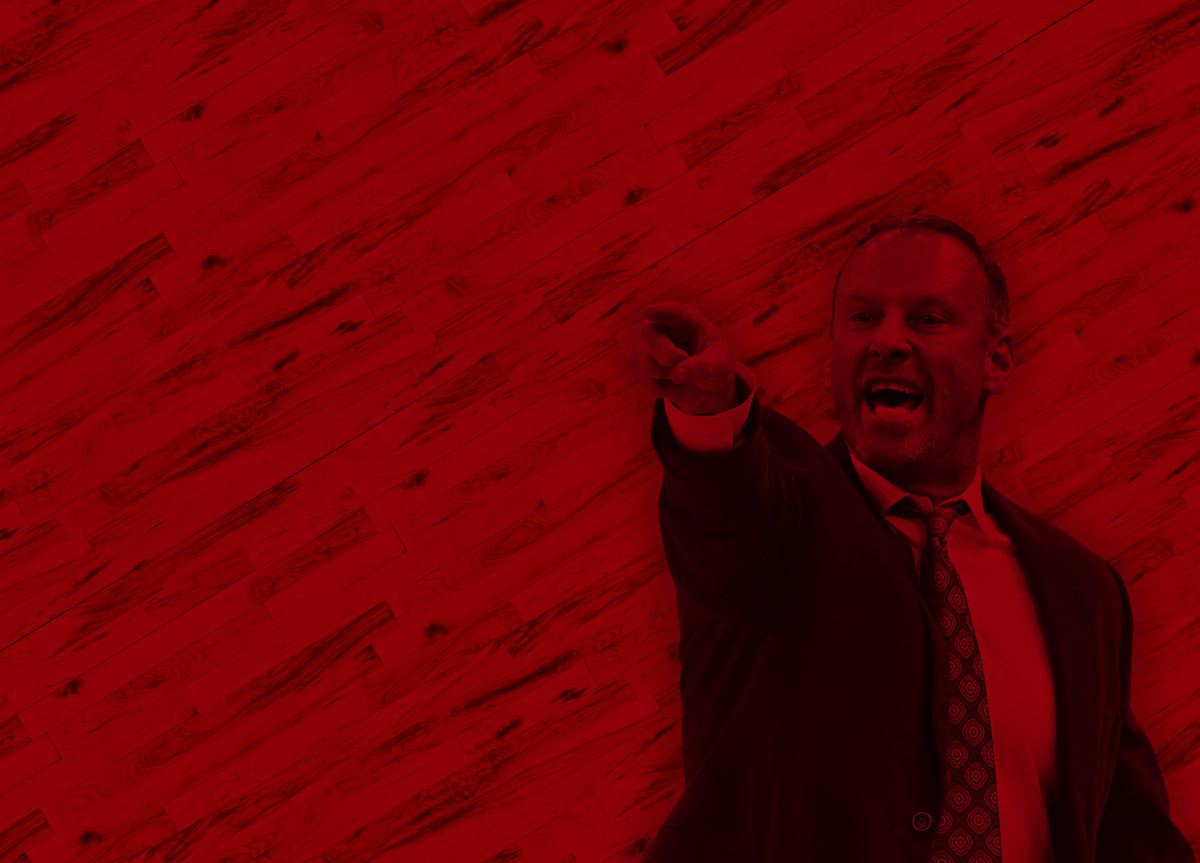 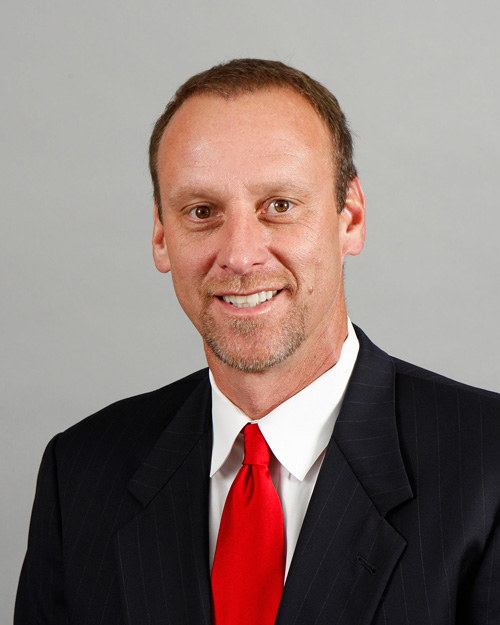 Larry Krystkowiak is in his ninth season as the Runnin’ Utes’ head coach, leading the program to postseason appearances in five of the last six years and 155 wins. Utah is the only Pac-12 program to have finished top four in the league five consecutive years.

Under Krystkowiak’s leadership, Utah has recorded five 20-win seasons, made two trips the NCAA Tournament and played in the NIT on three occasions. The Utes’ postseason success under Krystkowiak was highlighted by an NCAA Sweet 16 appearance in 2015, the NCAA second round in 2016, and the NIT title game in 2018.

Krystkowiak’s program has an excellent track record of developing players for the next level. Utah was the only Pac-12 program to have a player selected in the first round of the NBA Draft three consecutive years from 2015-17. Delon Wright (No. 20) was taken in 2015, Jakob Poeltl (No. 9) in 2016 and Kyle Kuzma (No. 27) in 2017. It was the first time the Utah program had produced three straight NBA first-round picks since 1997-99. Kuzma was taken by the New Jersey Nets before being traded to the Los Angeles Lakers, where he earned votes for 2017-18 NBA Rookie of the Year honors.

Another trend for Utah’s program under Krystkowiak is exceeding preseason expectations, which speaks to his ability to develop talent and build teams. One of Krystkowiak’s best coaching jobs took place in 2018-19, when Utah was picked to finish eighth in the Pac-12 Conference. With a squad that primarily consisted of three freshman starters, Utah won 17 games overall, went 11-7 in conference play and finished in sole possession of third place in the league standings. It marked the eighth straight season that Krystkowiak’s Utes matched or exceeded what was expected of them according to the Pac-12 preseason poll.

In 2017-18, Utah went 23-12 overall and finished third in the Pac-12 Conference after being slotted for seventh place in the preseason. Utah played in its third NIT under Krystkowiak and advanced to the championship final in New York. The Utes won four contests in the tournament, including a pair of home wins and a road victory at Top-25-ranked Saint Mary’s. The Utes won their NIT Final Four semifinal contest over Western Kentucky before falling to Penn State in the title game.

During the 2016-17 campaign, Krystkowiak led the team to a 20-12 overall record, which included an 11-7 mark in Pac-12 play and a fourth-place finish in the conference. 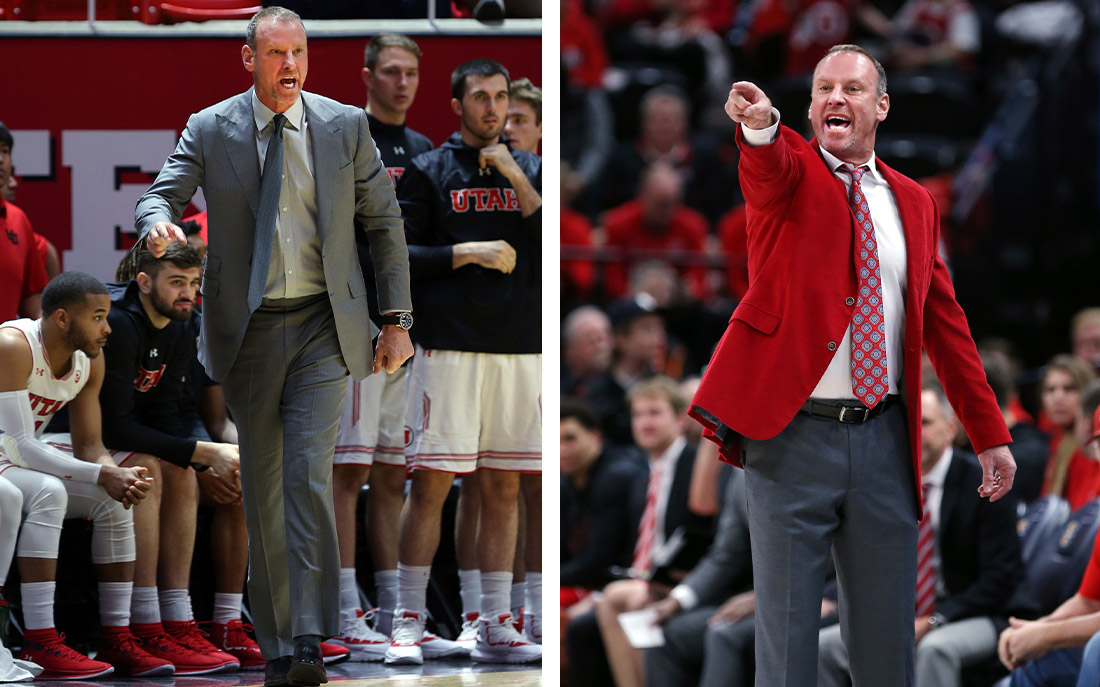 Krystkowiak guided Utah to a 27-9 overall record and the second round of the NCAA Tournament in 2015-16 as he was named the U.S. Basketball Writers Association (USBWA) District VIII Coach of the Year. During the season, the Runnin’ Utes defeated a top-seven ranked opponent for the first time since 2002 when they took down No. 7 Duke in overtime at New York’s Madison Square Garden. The Utes also managed to earn the program’s first two-game road sweep in Pac-12 play with wins over Washington State and Washington, and picked up the program’s first win at UCLA since 1961. The Utes finished in sole posession of second place in the Pac-12 Conference. After earning the No. 2 seed in the Pac-12 Tournament, Utah once again achieved something the program had never done by earning a berth into the finals.

Krystkowiak led the Utes to a 26-9 record, a berth in the Sweet 16 and a No. 15 final national ranking in 2014-15. Utah was ranked in the Top 25 for 19 weeks – the most time spent in the national polls since the Final Four campaign of 1997-98. Utah tied for second place in the Pac-12 with a 13-5 conference mark and reached the semifinals of the Pac-12 Tournament for the second time in three years. The Utes defeated Stephen F. Austin and Georgetown in the NCAA Tournament before losing to eventual national champion Duke in the Sweet 16, 63-57.

In 2013-14, Krystkowiak surpassed the 20-wins mark for the first time at Utah and guided the Utes to their first postseason appearance since 2009. Wright, in his first season under Krystkowiak’s tutelage, went on to earn first team All-Pac-12 and All-Defensive Team honors. The program had come a long way since Krystkowiak’s first season in 2011-12 ,when he took on a complete rebuild and won just six games. The Utes more than doubled their victories total in Krystkowiak’s second year by winning 15 games in 2012-13 and advancing to the Pac-12 Tournament semifinals for the first time in program history.

The Utes have also excelled in the classroom with Taylor being named a CoSIDA Academic All-District honoree in 2016. The Utes have garnered 19 Pac-12 All-Academic honors under Krystkowiak.

The resurgence of Utah basketball under Krystkowiak has ignited Utah’s fan base. The Utes have averaged more than 12,000 fans at home three of the past four seasons. Utah ranked second in the Pac-12 and No. 24 in the nation in home attendance in 2015-16.

Krystkowiak was introduced as the 15th head coach in Utah men’s basketball history on April 4, 2011. With a resume that included prior head coaching experience in the NCAA, CBA and NBA, Krystkowiak left a position as an assistant coach with the New Jersey Nets to take over at the U.

In his previous collegiate head coaching post, Krystkowiak led his alma mater, Montana, to a 42-20 record and two NCAA appearances from 2004-06 before joining the NBA coaching ranks. 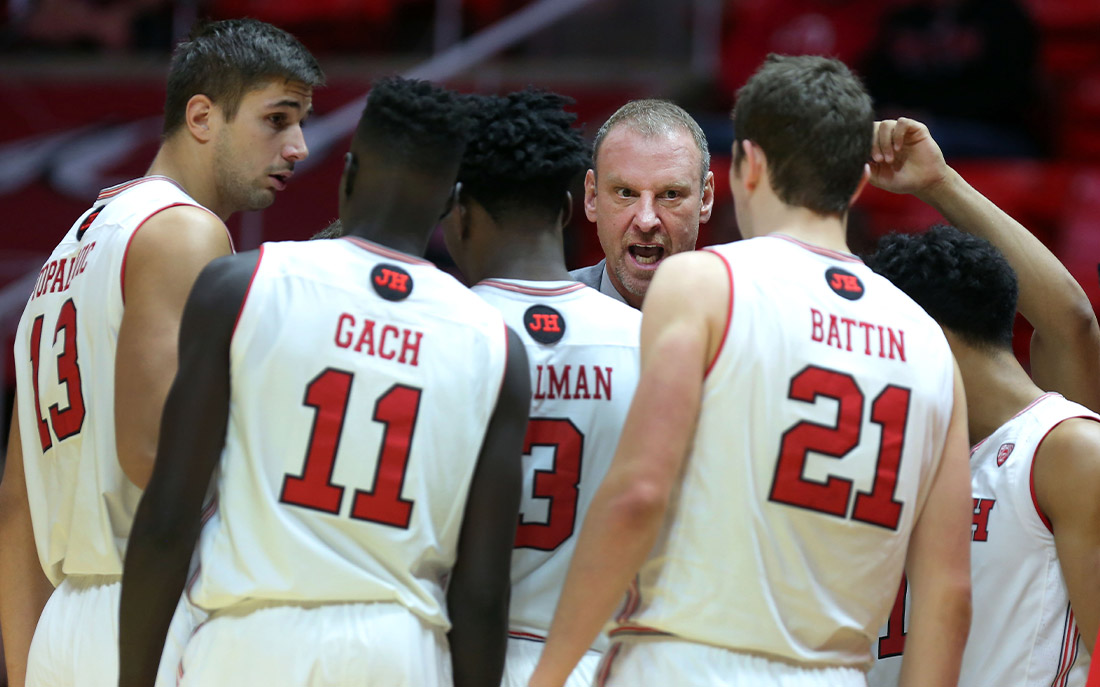 Hired as an assistant coach by the Milwaukee Bucks in 2006-07, “Krysko” was elevated to head coach with 17 games remaining in the season. He was retained as the Bucks’ head coach in 2007-08. Among the players he coached was former Ute All-American Andrew Bogut. Krystkowiak’s other head coaching experience was in the CBA with the Idaho Stampede in 2003-04.

After a nine-year NBA playing career in six cities, Krystkowiak’s first coaching job was as an assistant coach at Montana from 1998-2000. The Grizzlies were the Big Sky champions in 2000. He then moved on to Old Dominion as an assistant in 2001-02 before signing on as the head coach of the CBA’s Idaho Stampede. In his lone season with the Stampede in 2003-04, he led the team to a 38-14 record and a berth in the CBA Finals.

Krystkowiak spent the next two seasons as the head coach at Montana. The Grizzlies were Big Sky champions in 2004-05, winning the conference tournament and earning an automatic bid to the NCAA Tournament. Montana finished 18-13 after losing to No. 1 seed Washington in the NCAA first round. The Grizzlies appeared in the Big Dance in 2006 as well, earning an at-large bid and advancing to the second round with an upset victory over fifth-seed Nevada in Utah’s Huntsman Center. It was UM’s first NCAA Tournament win since 1975. Montana finished the season with a 24-7 record.

Krystkowiak made the Dean’s List four times at Montana, including in 1996, when he completed the degree he began over a decade earlier in business administration. He graduated with honors, boasting a 3.5 grade point average.

Krystkowiak and his wife Jan have five children, sons Cam, Luc and Ben, along with twin daughters, Samantha and Finley.